Menu
Log in
Register
Install the app
You are using an out of date browser. It may not display this or other websites correctly.
You should upgrade or use an alternative browser.

How Do you clean new concrete?

One of the easiest ways for a pressure washing job to go sideways is to attempt to use high pressure on a newer driveway. But how new is too new and why is that?

In general, after a new concrete pour, it is ready for foot traffic within 24 to 48 hours. From there, it is typically considered safe for most (average sized) vehicles after about 7 day and is considered partially cured. Next, if you follow industry standards, it is not considered “cured” until after 28 days, which is when concrete achieves its full, effective strength—so be sure to avoid using heavy equipment and large vehicles on the slab until then.


So the general rules are:


So surely this means that after a month of curing, the concrete is safe to pressure wash


Using high pressure on newer concrete, even fully cured, can have devastating effects. 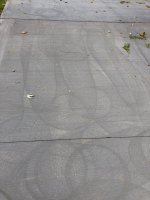 While this may initially look like the area simply wasn’t cleaned properly and you might think that a post-treatment of SH would “even it out”. The reality is that this concrete has been etched and the top, cream layer, has been destroyed.


Surface Cream is the very top layer of the concrete that is made up of the troweled cement paste that contains primarily the cement fines of the mix. This cream layer is much more delicate as it doesn’t contain the larger aggregate that the deeper layers have. It is very prone to damage when cleaned with excessive pressure.

Even after a month of setting and being considered "cured", concrete will actually continue curing for years. While its optimum strength is known to peak roughly a month after pouring, concrete will continue to harden and develop as time goes on.


Because of this, most contractors will suggest waiting at least 2 years before performing regular pressure washing on new concrete. Some won't even touch it if it hasn't been a full 3 years. This insures that the cream layer has fully set and reached it’s maximum strength. Even after fully cured, though, residential concrete is typically rated around 2500 PSI so you should never use anything stronger than that on the surface.

So now the question remains, What do you do if a customer has new concrete and wants it cleaned?


First, you need to identify and understand what the staining on the driveway actually is. Usually newer concrete won’t have deeply embedded dirt and grime from years of weathering, so most of the times, there is a particular stain that the customer wants removed.


Maybe it’s construction debris (dirt, dust, etc.), maybe it’s red clay stains? Did some oil leak out of an old car? Or maybe they live in a very wet/humid area and the organic growth took off much sooner than usual.


Either way, it’s important to identify the stain so that you can remove it.


For newer concrete, I typically recommend about a MAXIMUM of 800 PSI. This, in most cases, is not needed though.

The key with all of these though is to allow the products and chemistry to do the work. Keep the wand pulled back really far from the surface, use a maximum of 800PSI, and think of it more as soft washing/rinsing instead of pressure washing.